Life has taken some interesting and brilliant turns, I'm specialising in my area of interest and things are just clicking along.

I generally don't find much to blog about any more, which is a shame, as I found a lot of value out of reflecting here.

Unfortunately due to the nature of blogging in Australia and the need to remain anonymity, it makes blogging very difficult, as continual self-censorship has to be one of the biggest enemies of writing that I can imagine. So while I might think of things to say, I really can't say them.

I'm leaving this blog here because it still has value for me to be able to look back on those times I went through being a medical student, but in the meantime I have much larger things to focus on.

I hope you are all well.

Wishing you all a wonderful Christmas and the best for the new year.
Posted by The Girl at 6:28 PM 3 comments:

You know that Summer has struck when you finish work while the sun is still shining, and feel a sense of disappointment, because at least when you leave the building just after the sun has set, you will melt a little less when you get home.
I appreciate the daylight hours a lot more when the days don't feel like you are living in a sauna.
Soon the people who live in the house behind ours will likely be jumping into their pool and yelling helpful things like, "Gee, isn't having a pool great!" while we swelter, pool-less, in our home.
One day I will do the sensible thing and move somewhere cooler. One day.
Posted by The Girl at 8:20 PM No comments:

Email ThisBlogThis!Share to TwitterShare to FacebookShare to Pinterest
Labels: Random

My concern preceding the last rotation was entirely unwarranted - I just loved it and had a great time. I have a feeling that the next rotation will be similar.
It is funny, if I enjoy the work then I don't mind putting in a few extra hours here and there. Naturally there is a limit, but I would rather be in a job I liked and stay for an hour or so extra each day than be in a job where I felt miserable and bored. Of course, all things are a trade-off, and working in an excessively stressful environment with huge mountains of overtime would destroy any benefits of working in a field I loved, and I would rather be bored and go home on time.
So like all things, it is all about balance.
Anyway, I can't believe that we are now in the last rotation of internship. It has gone so quickly, and yet so much has happened. The first half of the year was probably one of the most challenging of my life, and the second half was more about learning how to enjoy work again.
I really don't know how much more I have to add to this blog, seeing as how it started out being about life in medical school, and now that internship is over, it feels like I don't have much more to say about work. I don't know if I'm ready to bow out just yet, so I'll pop in and post every now and again, but it feels as if life has somehow moved on.
The important part is, I'm happy. :)
Posted by The Girl at 9:18 PM 4 comments:

Email ThisBlogThis!Share to TwitterShare to FacebookShare to Pinterest
Labels: Internship

I have just had several lovely weeks away from work. It has been such a blessing. I have been so blissfully relaxed. I'm happy, I'm dreaming about things apart from work, and I have had the energy to do non-essential cooking.
It has been a nourishing time, and a much-needed one.
Now I'm wondering how I can carry this feeling of peace and being chilled with me into the next rotation. I know that I probably won't, but I really, really want to try.
The last time I managed this was during my psychiatry rotation. I'm hoping to be able to obtain it again when I start to specialise in this area. I like to do things promptly and in an organised fashion, but it is far more relaxing for me to know that they do not need to be done right now and can probably wait a few hours or even a day or three.
I was quite relaxed during my emergency rotation, but found the style of work very tiring and thoughts of having missed things or having documented something incompletely often plagued me in my sleep. Bed block and ambulance ramping are nightmares.
You can tell that I'm worrying about it a bit already - after all, I have just written this post.
Posted by The Girl at 8:01 AM 2 comments:

Email ThisBlogThis!Share to TwitterShare to FacebookShare to Pinterest
Labels: stress

10 years ago (in Australia)

And now for something a little different, as pictures seem to say more about my life right now than words: 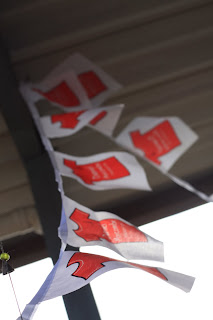 Some things make me too sad for words. But then, I don't have to speak. I can support the foundation that his parents have set up in his memory, trying to make sure that what happened to their son does not happen to other children.

Right now I still feel the sense of sadness and loss whenever I see his parents on the news or at a press conference. What I also feel is a rumbling sense of rage, that somebody stole this life, this future from him and his family, and that this criminal has presumably been kept hidden and protected by other criminals, leaving his family, friends and community in painful limbo for years.

The Australian media and social media have been told to be very careful about what is said in relation to the case, because a man has finally been charged after so long, and they do not want to risk any form of mistrial.

As his mother said, I hope that they can see Daniel buried with dignity soon.

On a lighter note: 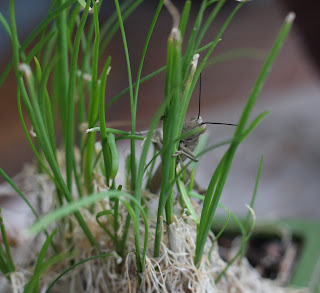 At least somebody is enjoying the chives in my garden.

It is great noticing this creature AFTER I have just watered the plant. Really. At least he or she had the good sense to sit very still.

I hate it when they jump. It is so very random. One landed on my face once. Now they scare me. Out of all of the things in Australia, I probably hate locusts the most.

The Girl
Welcome! I have successfully escaped medical school and am embarking on a life as a junior doctor, and this is my blog, used for a bit of light-hearted relief from life. Enjoy.

How To Survive Medical School